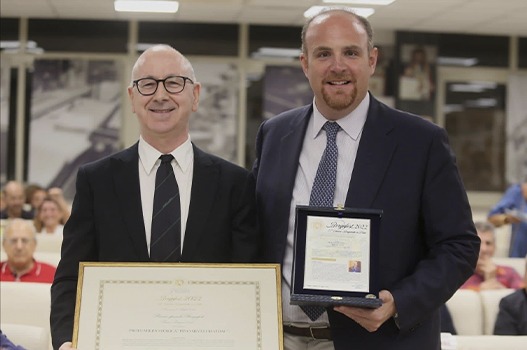 On Sunday, 24 July 2022, Marco Vidal, CEO of The Merchant of Venice and General Manager Mavive SpA, accepted the Bergafest 2022 Special Prize from the Bergamotto Academy.

The title was awarded to Mavive SpA for the combination of the quality of the olfactory product of The Merchant of Venice brand, the fine lagoon craftsmanship present in the refined bottles that hold the essences, and the noble Venetian perfumery tradition where spices from the markets of the Orient are blended with Mediterranean notes, of which bergamot was certainly the most precious.

Marco Vidal confirmed that bergamot has always been one of the most important raw materials used by him and his family over generations to create works of art in the olfactory world. To confirm his argument, a few months ago with the release of Accordi di Profumo by the brand The Merchant of Venice, Bergamot immediately played a central role in the development of the collection.

The International Bergamot Academy of Reggio Calabria was founded to promote and enhance the prized citrus fruit through the traditional 'BergaFest' event. In its twenty-one editions, several personalities from the worlds of culture, business and science have been awarded the title of 'Ambassador' to represent the Academy in the world.

The Academy includes all the Ambassadors, who over the years have proudly and with dedication fulfilled their task of publicising Reggio's Green Gold, enhancing and promoting the prized citrus fruit in the fields of Culture, Taste, Scientific Research, Medical Research, Entrepreneurship, Traditions, Press and Television.

The mission of the International Bergamot Academy is to continuously promote the value of the citrus fruit by involving and raising awareness among national and international experts.